"We are the "Cinderella Men

We admire the grassroot parochial football, free from shining stars and big money. We are motivated by the power of fascinating views and culture of England, and the astonishing legacy of the beautiful game’s homeland. 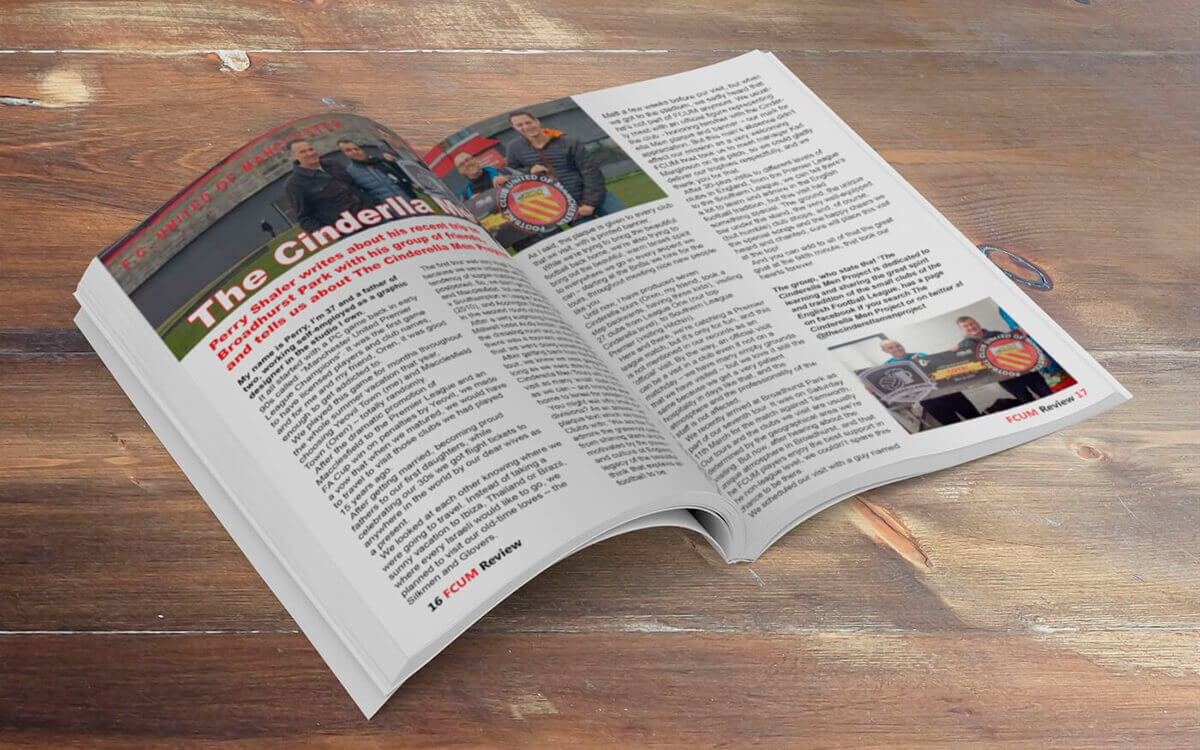 The Cinderlla Men
Perry Shaler writes about his recent trip to Broadhurst Park with his group of friends, and tells us about The Cinderella Men Project My name is Perry, I’m 37 and a father of two, working self-employed as a graphic designer in the studio I own.

It all started with a PC game back in early 90s called: “Manchester United Premier League Champions”. It was the first game to have licensed players and club names, and for me and my friend, Oren, it was good enough to get addicted to.We played this game for months throughout the whole summer vacation that year, choosing Yeovil Town (me) and Macclesfield Town (Oren) – totally randomly.

After the dramatic promotion of Macclesfield to the Premier League and an FA Cup win on penalties by Yeovil, we made a vow that when we matured, we would have to travel to visit those clubs we had played 15 years ago.

After getting married, becoming proud fathers to our first daughters, while celebrating our 30s we got flight tickets to anywhere in the world by our dear wives as a present.

We looked at each other knowing where we were going to travel. Instead of taking a sunny vacation to Ibiza, Thailand or Brazil, where every Israeli would like to go, we planned to visit our old-time loves – the Silkmen and Glovers.

The first tour was very rough to schedule, because we were unfamiliar with the tendency of league matches being postponed. So, we didn’t get to see Yeovil and Macclesfield, but we did see Millwall v Southampton in League One that year (2010), and Accrington Stanley v Gillingham in the second round of the FA Cup.

After a very surprising hospitality from the Millwall boss Andy Ambler, letting us inside the dressing room and on the Den’s pitch, there was a moment where we understood that we were doing something special.   After getting back from the first successful tour, we knew we were going to do this as long as we were able to. So we created the Cinderella Men Tours with a clear target to visit as many ‘small’ clubs in English football as we can – and bring the atmosphere back home to Israel for people to learn from.   You might ask why small clubs from lower divisions? As an answer, I will quote the plaque text which we honor the Cinderella Clubs with: “We are the Cinderella Men. We admire the grassroot parochial football, free from shining starts and big money. We are motivated by the power of fascinating views and culture of England, and the astonishing legacy of the beautiful game’s homeland”. I think that explains all the things we all want football to be.

As I said, this plaque is given to every club that we visit, with a printed banner.

Until now, I have produced seven Cinderella tours (Oren, my friend, took a step backwards, having three kids), visiting 27 clubs from League One (our top Cinderella level), to Southern League Premier (visiting Hitchin).

Here and there, we’re catching a Premier league match, but it’s only for fun, and this is not mentioned in our records as an ‘official’ visit. By the way, an official visit can be a visit in a club even if not on a matchday – we have many empty grounds that we have visited – but we love it still the same because we get a very patient hospitality in days like that, and the atmosphere and the professionality of the staff is not affected.

We recently arrived at Broadhurst Park as part of our seventh tour. It was on Saturday 11th March for the match against Tamworth. Our tours and the clubs we visit are usually determined by the geographical area we’re visiting. But now, after hearing about the unique atmosphere in Broadhurst, and that the FCUM players enjoy the best support in the non-league level, we couldn’t spare this chance to be there.

We scheduled our visit with a guy named Matt a few weeks before our visit, but when we got to the stadium, we sadly heard that he’s not part of FCUM anymore. We usual-ly meet with an official figure representing the club – honoring him/her with the Cinder-ella Men plaque and banner – our mark for appreciation. But this man’s absence didn’t effect our mission as a very welcoming FCUM host took us to meet manager Karl Marginson on the pitch, so we could gladly deliver our trophies respectfully, and we thank you for that.

After 30-plus visits to different levels of clubs in England, from the Premier League to the Southern League, we can tell there’s a lot to learn and admire in the English football tradition, but this visit had something special. The ground, the unique bar under the stand, the very well-equipped (but humble) club shops, and, of course, the special songs and the happy cheers we heard and chanted, sure will place this visit at the top!

And you can add to all of that the great goal at the 94th minute, that took our hearts forever.